Your source for all guides, instructions and useful info from the old site - please do not post in this section for help
Post Reply
33 posts

So this morning I thought before the apocalyptic weather comes in, I'll get cracking on a few jobs that have been niggling for years!

Firstly, the heater doesn't heat anything more than tepid. The matrix has been flushed (twice) in the past, all the hoses get hot properly, it's had new genuine thermostats, a new rad, water pump and dash temp sensor, so it can only point to one thing:
The foam in the heater box.

So, time to get cracking!
Firstly, remove the bottom parts of the dash (driver's and passenger side storage areas.) A number of screws into the upper dash and centre console. Remember which screws went where, as a couple are different lengths and the thread is different.
Remove gear knob errr knob, by undoing it anticlockwise, pop off the gear gaitor and undo the single screw towards the front. The centre console can now be removed by pulling it forward and manoevering over the gear knob.
The heater tunnel (or whatever it's called) is now exposed.
Unscrew the one remaining screw on the right hand side of the heater tunnel, this will free the lower section and some wiggling will allow that to be removed (Tip: push down into the carpet to give yourself that tiny bit of room required to get it out.)

You should be left with this, the heater diverter box:

^^^ I have already removed the black plastic nuts either side of the heater diverter box.

If you're like me, you'll be scratching your head wondering why it wont come out!

Remove the 8mm hex bolts either side of the dash:

One in the centre section (basically above the heater diverter box)

One under the glove box.

This will give a bit of movement to the dash with will be imperitive later.

Remove these screws from the dash vents:

The dash vents shall now pop out (note the little clips on the bottom of them, so push them up into the dash to aid their removal.)

This is what you should be left with:

Remove it by lots of wiggling, making sure the ducts are free from the pipework, this is where that extra movement in the dash is so important.

Have a beer to celebrate getting it out.

This was the state of our diverter flap. It should be covered in foam!

I used toolbox liner foam to cover it back up. But you can use anything, so long as air can't pass through it. Gaffa tape will do the job lol!

Also, if you open this flap by adjusting the direction of air flow using the dash control you will see behind to this:

This is the hot/cold diverter flap. Again, should be covered in foam.

Refitting is the reverse of removal (as says the Haynes Manual on so many tasks!) But just ensure your heater diverter box has fully located the ducts with the pipework. Also that the flaps fully operate and you haven't gone too over the top with your new foam.
0 x 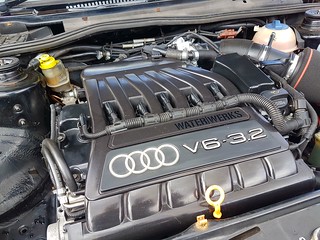 I wrapped mine in alu tape as well

good guide mate. if your happy, this is one id like to stick on the main site at some point.
0 x

Head over to the new forum and register!! https://www.vwgolfmk2.co.uk/clubforum

This is exactly what I needed to know! For months I've noticed bits of foam flying out of various vents and questioning whether the diminishing heat was a result of this. With the current weather - getting freezing air blowing against my calves - I need to use the advice pronto. Cheers for the pics.

Hey memsis, do as you wish with this thread. I'm sure there may be better guides out there, but hopefully this one should provide the necessary info.

Sly, that looks better than mine, but I didn't bother removing the whole unit (couldn't work out how tbh!)

Barleymonk, it's not a hard job by any means, so long as you know what you're doing (which I didn't) you could get it done in less than the 2 hours it took me. If I were to do it again I think it could be done in about an hour.

Should have mentioned,
Tools required:
Philips screwdriver
8mm & 10mm socket and ratchet.
Chosen foam/tape - self adhesive preferably, if not, double sided tape and stick the foam to the flaps.
0 x

This is why I have shades in my car, eye protection from spongy projectiles! nothing to do with daylight!
Last edited by eddypeck on Tue Jun 24, 2014 4:40 pm, edited 1 time in total.
0 x
K-Jet Resources - Officially branded k-jet Jedi by tabbie

macmillions wrote:Sly, that looks better than mine, but I didn't bother removing the whole unit (couldn't work out how tbh!)

I did mine when the car was completley stripped.
Also replaced foam at joining sections.

These are all my pics
Problem

This is how I fixed mine

Thanks for the hints & tips

Users browsing this forum: No registered users and 4 guests