Hi folks. Been a while since I’ve been on here. Turned out my car was just a filthy rot box couldn’t face looking at it or attempting to fix. Bit down on me luck already so I’ve just let it slide.
12 months on I’ve bought a Japanese import no rot, mechanically sound. It came with some kerscher carmonas 9x16 that had stretched tyres that had cracked etc. Wouldnt have passed an mot the condition they were in I’m about to put them back on but was wondering a couple of things. Firstly anyone have any idea what size tyre would look best on the rim. Second, there’s some small nuts screwed into the actual wheel which corresponds with the screw to keep the centre cap on. Any ideas on where I could find these. There’s one missing. Google turns up nothing. Thought about bastardising using an insert screw or just making my own but would be nice if I could get the genuine bit I’m missing.
Car needs new tyres and tracking so I’ll have to leave one centre cap off if needs be.
Thanks in advance for any responses folks. Take it easy

Seller on eBay.de has them, though may possibly be a re-seller. 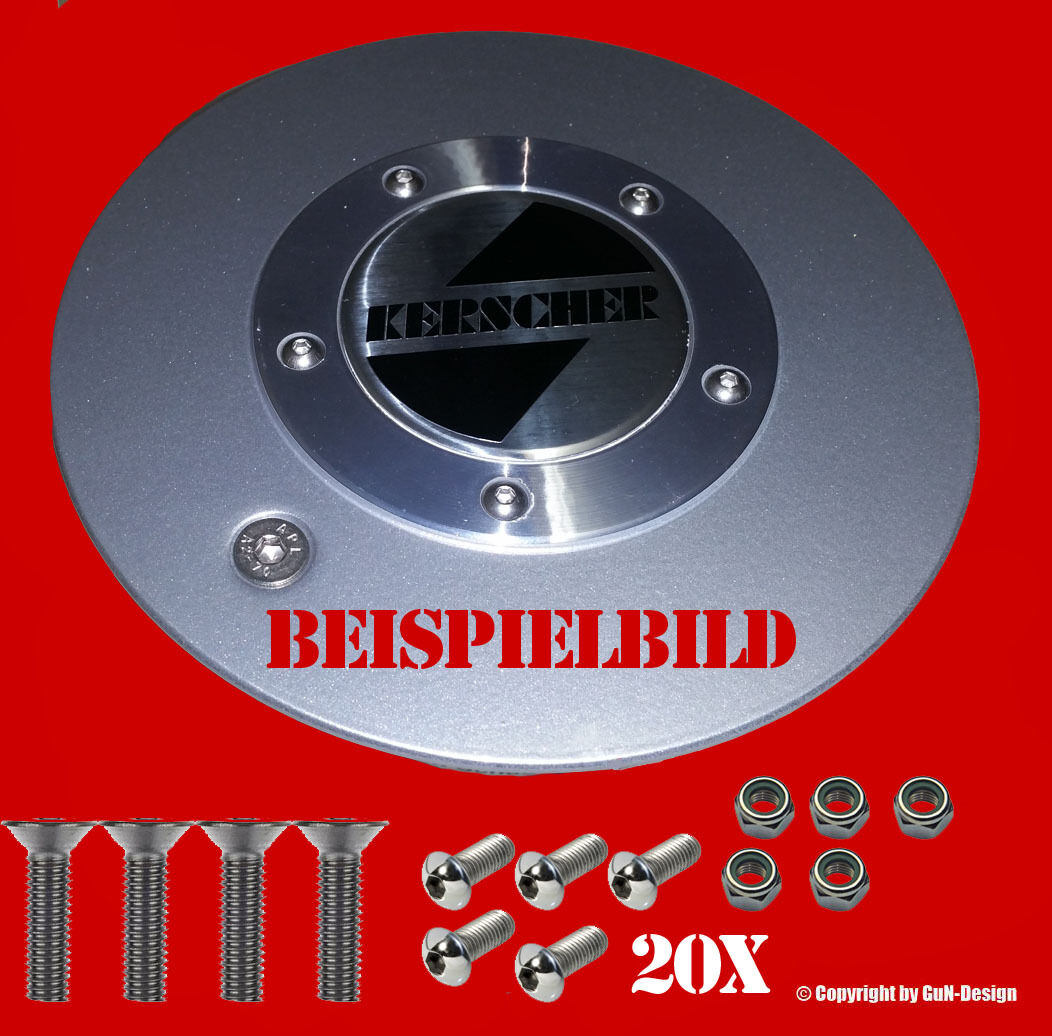 The same thing, even the image used is also here and at half the price, though obviously the second seller is an unknown quantity / riskier.

Look like run of the mill bolts, you may be able to get them closer to home , for a lot less.

The Kerscher site has some links to documents that relate to you wheels... not much use in the UK, but if you're selling them on later the Germans need the homologation papers for their equivalent of our MOT.

Thanks for the reply Bacardi. The bolt I’m after is a little different to that. It’s just one bolt that has a thread machined into the head. So when it’s bolted into the wheel the plate goes over covering the wheel nuts then a stubby screw nips through the plate and into the head of the bolt.
I’d post a pic but not sure how.
Ive has an idea to bodge one together. Might be able to get a grub screw and a coupling nut to do the job if the threads are consistent. I’m just afraid to remove one to have a look.
Dropped them off to have the tyres done so they’re going on regardless.
Thanks again for the help it really is appreciated.
0 x

Emailed kerscher they answered back. They call it a Spindle Fixing. 2.50 euro a piece plus postage.
Appears that my luck might be turning I never drop on owt me.
Cheers again for the reply Bacardi
2 x

Glad it worked out (and cheaply), you should order some spare and re-sell them yourself!

I put up a post recently with a link to a Japanese export site... did you use something similar or was the car already brought into the UK by the time you got it?
1 x
http://www.peugeot-205-gti.com

Is this the five door auto with Non matching front and back seats?
1 x

bacardincoke wrote:Glad it worked out (and cheaply), you should order some spare and re-sell them yourself!

I put up a post recently with a link to a Japanese export site... did you use something similar or was the car already brought into the UK by the time you got it?

Lol you read my mind. I was gonna order a few sets for what they cost. I’d give them away to folk if they needed them. Even when you know what they’re called google shows nothing up at all.
No it was already here just not registered. It had been on eBay a long long time. I’m not surprised really as it’s a bit of a shed asthetically but starts first time n runs like a dream.
0 x

Damien.wrl wrote:Is this the five door auto with Non matching front and back seats?

Haha yeah. I think it’s been on a good 2-3 years. It’s not far from me so when I noticed they’d dropped the price I went n had a look. It was scruffy and ugly but it was local and I needed a car so it was that or a Ford Fiesta. Looked around it and it looked sound. After the last shitter I bought I know exactly where to look.
Knew I had a load of spares to sort a few bits out. Had to do the heater matrix and a couple of no spark issues but starts first time and runs really smooth. First thing I did was remove those ugly seats and put the originals in. Decided I’m going to get seats reupholstered. The dash is cracked but found someone to repair that. Was also considering changing to a manual gearbox.
I didn’t pay what it was up for and got some money knocked off. Think they just wanted rid. Looking on eBay I’ve got decent value knowing it’s structurally sound I’m happy to change bits here n there and the odd consumable. But finding hidden rot on the other one killed me. So I’ve signed up to do a job a month to get it looking as good as it runs.
It’s registered as a gti but it’s a gt that’s had a transplant. Also has fully functioning air con which is nice. But gets in the road when yer trying to get into and around the engine.
On the whole I think I got a fairly good deal. At one point it was on eBay at 9,999 haha I laughed at they guy when I brought it up.
Edit: I didn’t look at it when it was up for 9,999. Only on eBay to giggle to me sen. I went to look when it was at a third of that price. And I didn’t pay that.
0 x

Knew it had been for sale a while ago .... glad you are happy with it , that’s all that matters
1 x

Damien.wrl wrote:Knew it had been for sale a while ago .... glad you are happy with it , that’s all that matters

Lol I sense your feelings on it. Mine are the same. It’s not the best in the world but at the end of the day it’s to get me to work and back. It’s more than capable of that. It won’t look like the eBay advert once I’m done. Just a nice bob to work car. It was either that or an A reg Granada.
I don’t have or don’t need a gleaming show car. My job involves getting mucky and I’ve 2 chimps I have to ferry about that can dirty things by simply looking at them.
It would have been nice to be able to afford a nice 3 door that had been looked after but I don’t have that sort of money. Maybe one day eh.
0 x
Post Reply
10 posts • Page 1 of 1

Users browsing this forum: No registered users and 1 guest