in car entertainment, get the best out of your ICE system also wiring problems, lighting, switches - anything that's not ignition system or ECU related
Post Reply
16 posts

Has anybody fitted one of these?

Im having trouble with mine. Keeps going to safe mode after the key is removed. Iso wired up properly. Cd player in before was fine, saved all settings etc when key out ignition
0 x

My bets on either wiring or a questionable unit.

Take it out, get the multimeter on the pins and check live, ground, switched live etc. Are all doing what they're supposed to. Door switch, alarm (if fitted) aren't doing anything odd and that you've wired it in correctly.

I think the switched live and permanent feed pins on the radio are different to the iso connectors. Swapped them round and it switches on and off fine but with the key out, obviously as it has permanent 12v.
Will this flatten the battery? Ive left it as is for now to see if i go back to it tonight with a flat battery.
0 x

I've a VW Gamma 3 and here's part of the manual which is unfortunately in German. 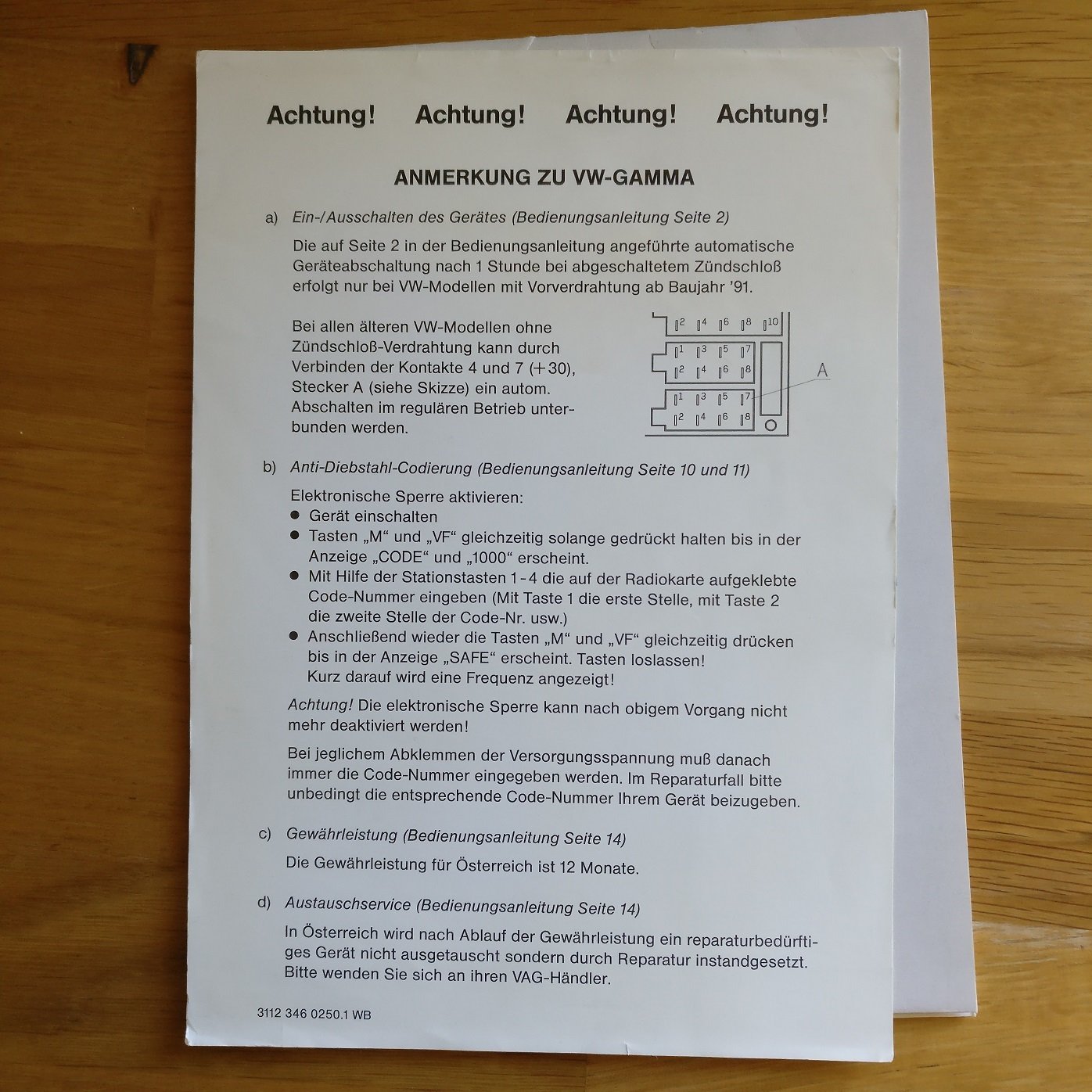 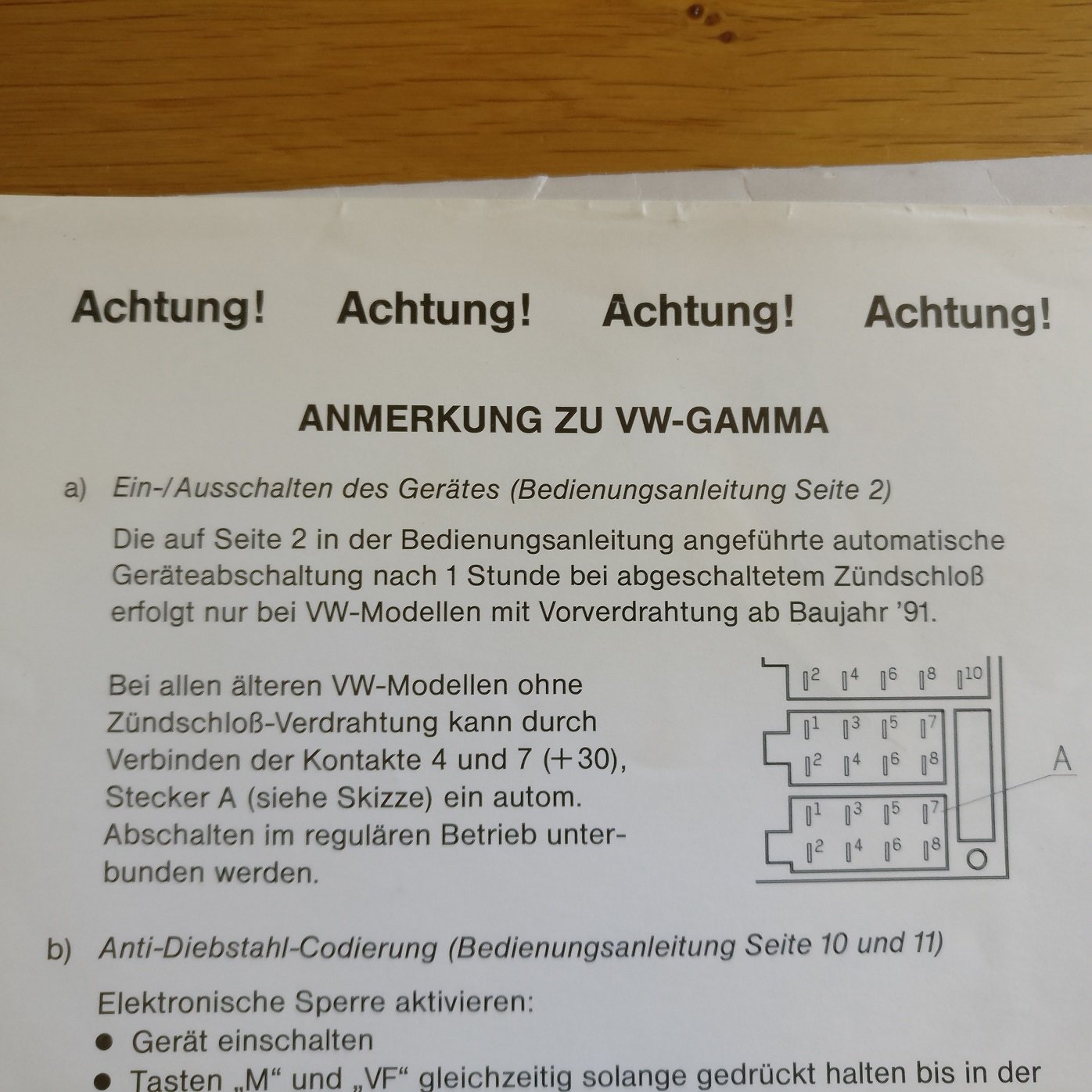 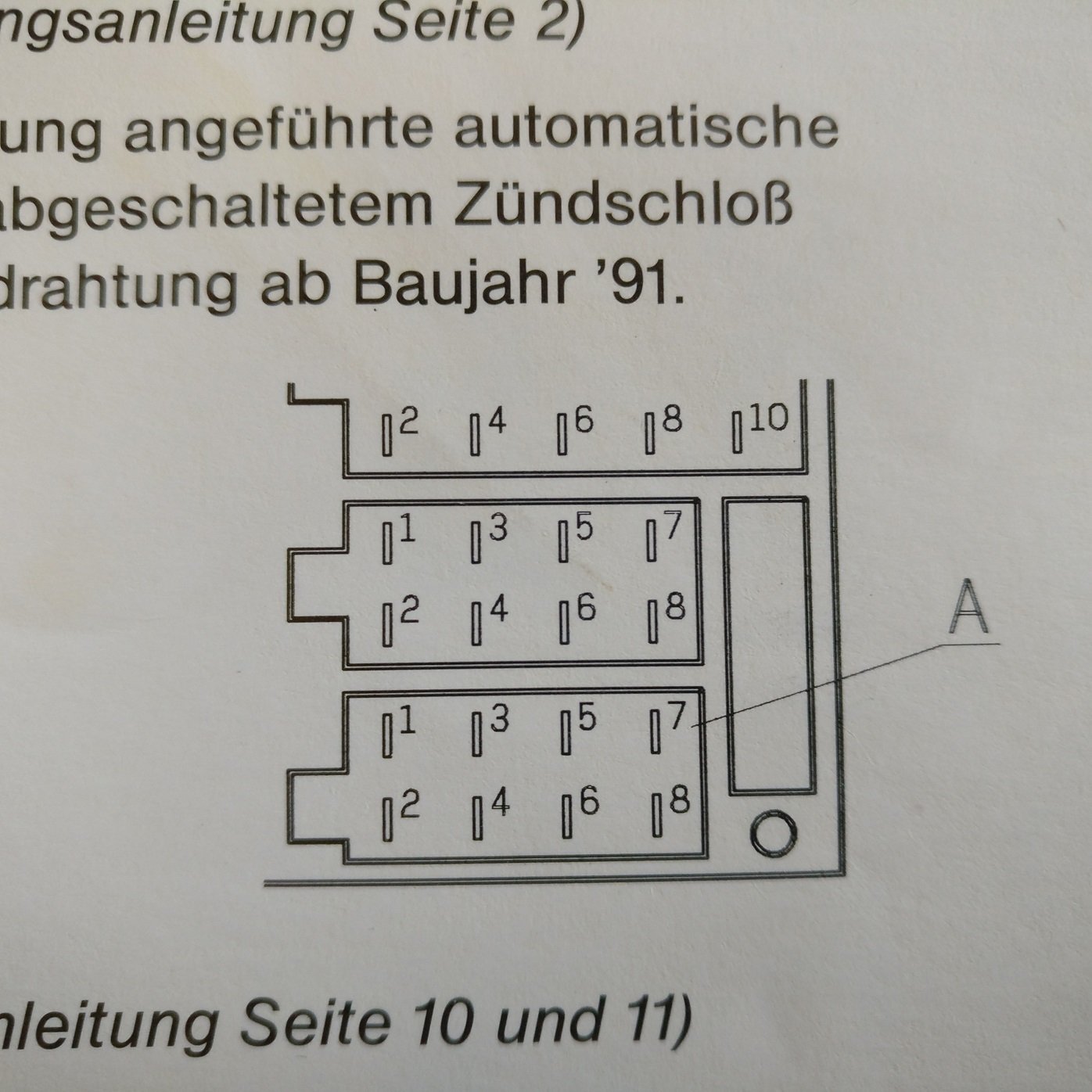 I think the gist of it is that terminals 4 and 7 in block A are the power feeds (4 being permanent and 7 being acc. switched)

I Googled for more info. and found a reference to the Audi Gamma 3 which seems to show on that set it's reversed and 7 is the permanent live.

My car's a '91 8v and the factory ISO connectors work fine with the set (which was also made that year).

Is your ISO connector original to the car, maybe and Audi one added later?

Thanks for that.
Yeah i found the pin out online.
So did you just plug the thing in and away it went?
Ive played about with swapping perm live for switched and vice versa and the only way it seems to not go into safe mode when switched off or key out is if i combine the two from the radio side to the perm feed coming from the car.
Radio never came with an iso adapter so its just a universal one.
Car loom was all chopped.
Everything else connected up properly and working
0 x

I think the gist is that 4 is switched, 7 is permanent feed (terminal 30). Or vice versa.

Try connecting those two and a solid ground to pin 2 (verify this is a good solid ground key on and off), that's what I'd do.

If that doesn't work verify that 5 isn't an aerial out (check using a multimeter no power is coming out of it) and connect a perm live to it - from research I believe on some units that was the "Safe" pin which kept the memory when the unit was turned off. That would be my next port of call.

One of those combinations should be correct.
0 x

Yeah had another go this morning.

Only way it works is if 4&7 coming from the radio are twisted together and connected to the dash loom permanent live. Which obviously means it is still on when the key is out.

If its connected how it should be as the drawing above, it comes on when key out but when you put the key in it disconnects it some how for a split second and it goes into safe.

Connected up asper the dash loom, you need to put the code in every time you switch it off

Weird thing is its storing the saved radio stations.

Gony get the volt meter out tonight, see how this perm feed is being interrupted by key in
0 x

Just to confirm we're talking about the same set, is this yours... there's various Gamma's, plus some USA specific versions? 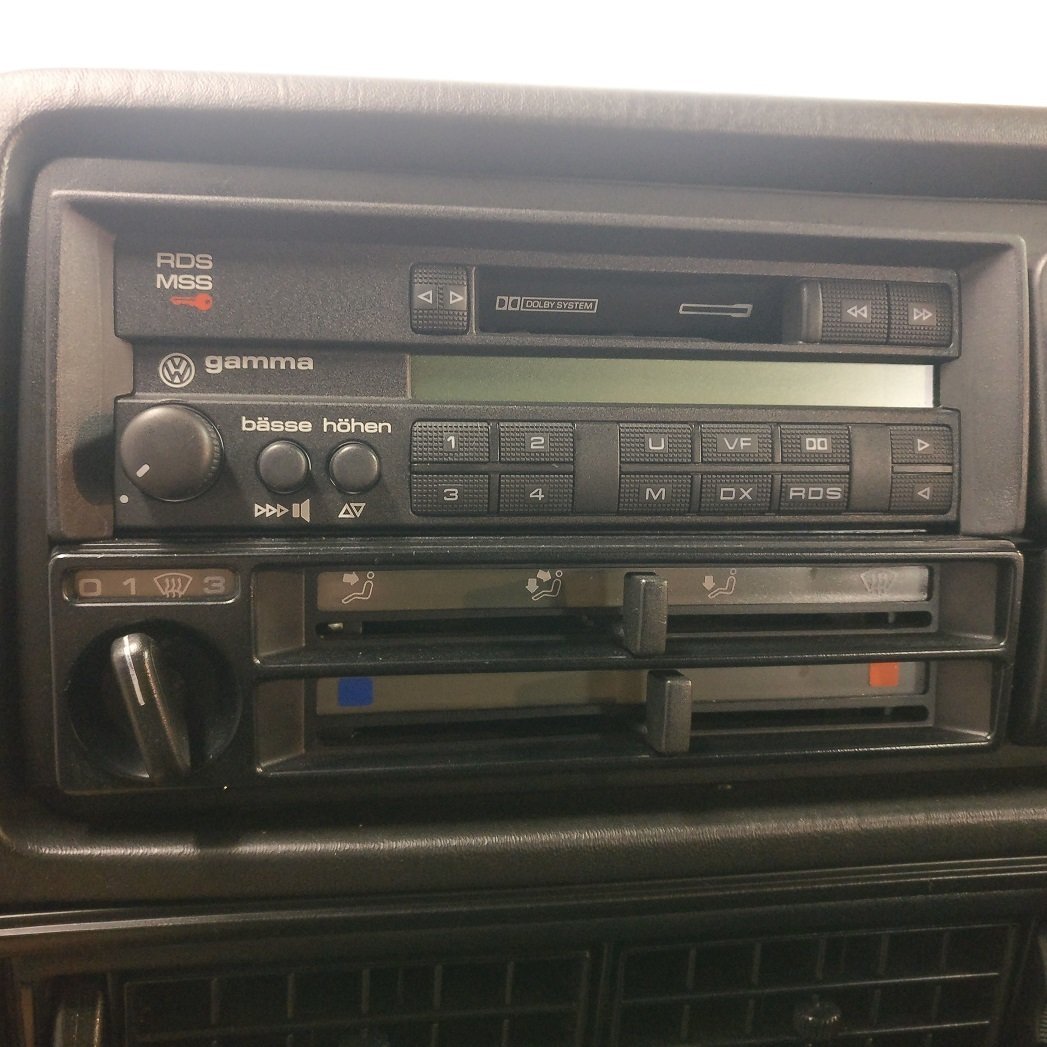 I've tried to photo the factory wires/connectors for you, but unfortunately they didn't come out as clear as I'd hoped.

If you need other angles etc. let me know.

If your cars harness has been chopped about maybe you could work back to the point where the original wires end and confirm the correct colours are matching up to the correct terminals on your universal connector?

I'm relying on Google Translate to read the extract from the Gamma 3 manual pictured in my original post, so don't take this as being accurate, but I think it's highlighting that pre '91 cars (yours? might explain the chopped loom) may have different connectors and that terminals 4 + 7 on Gamma 3's are the acc. switched/permanent positive ones you'll need to wire it up. 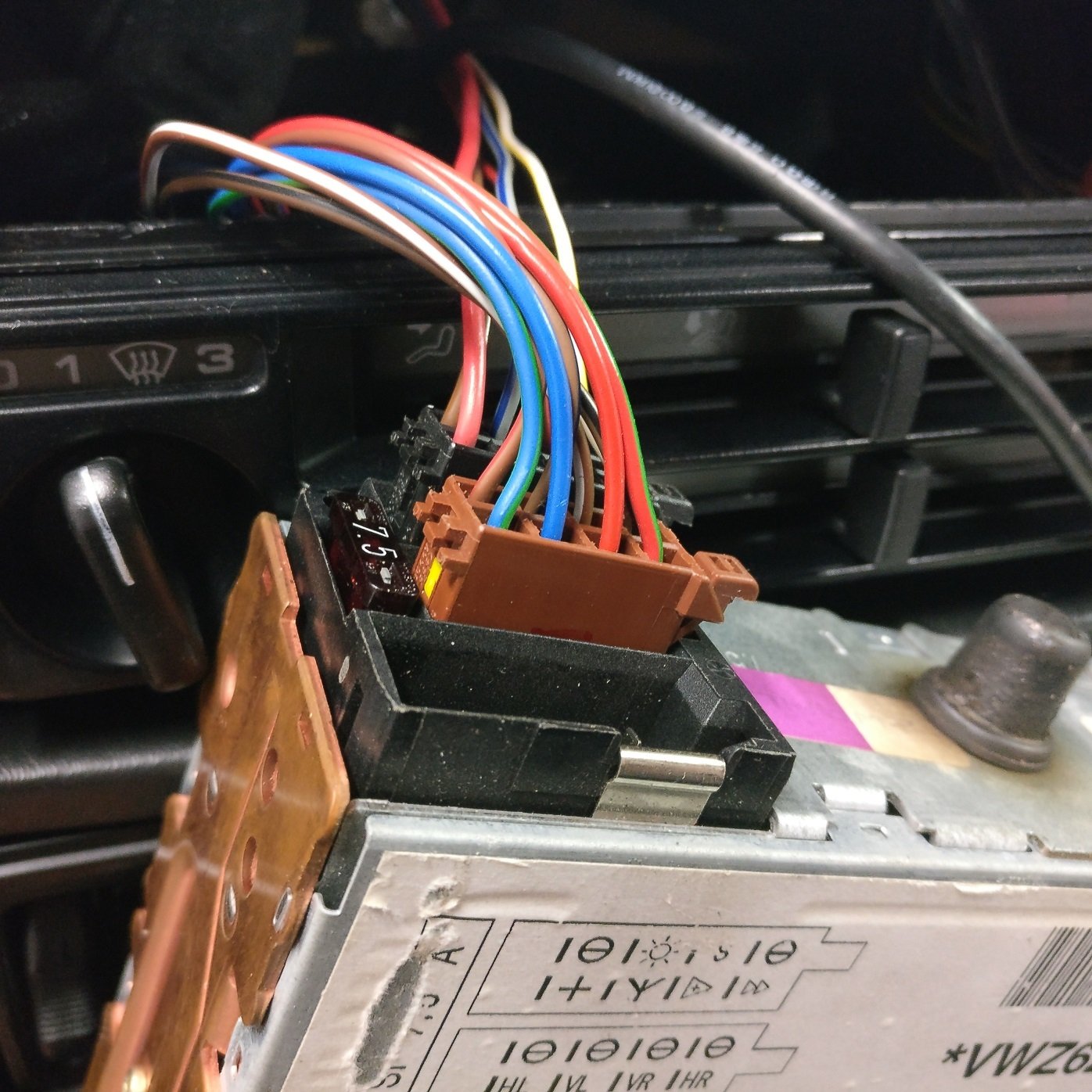 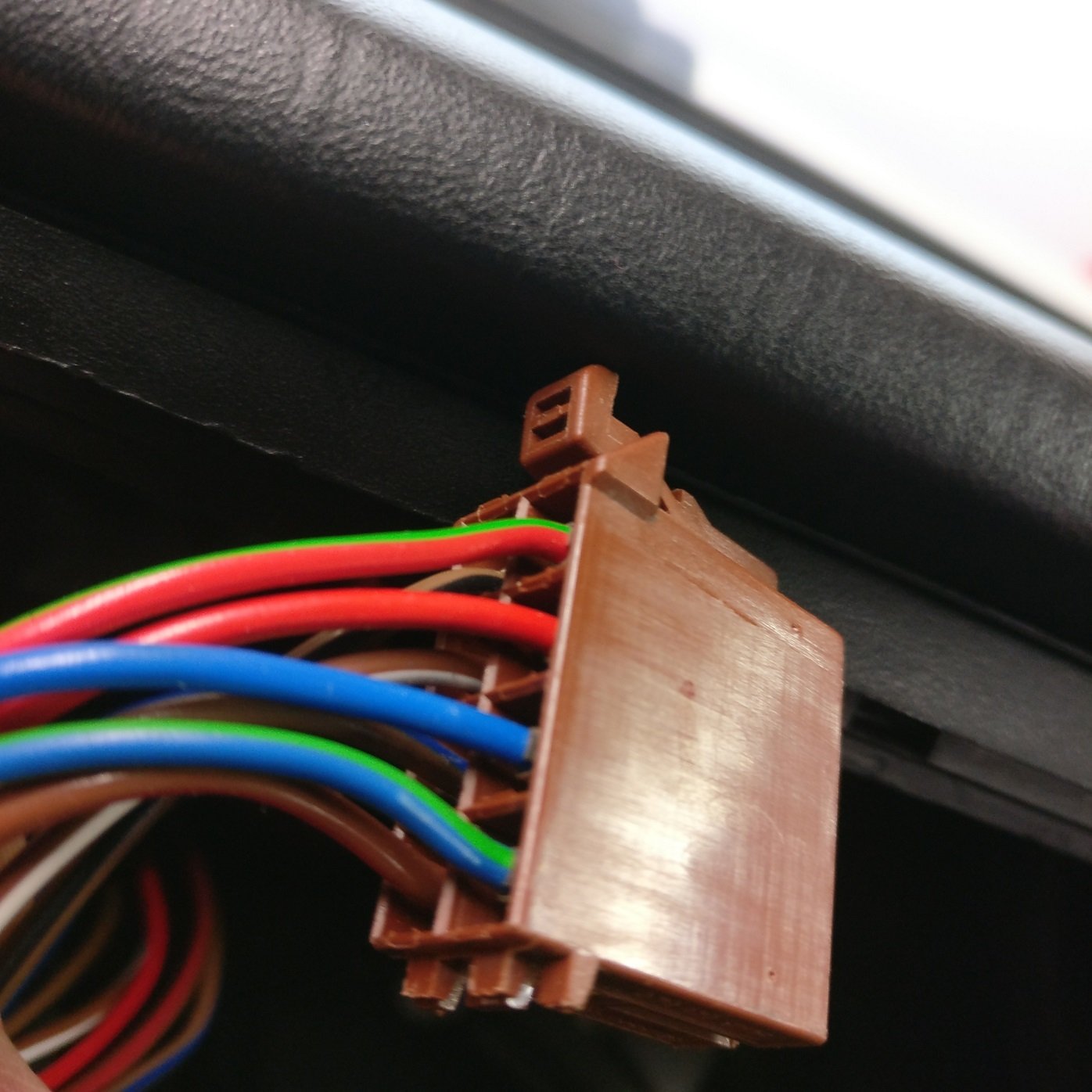 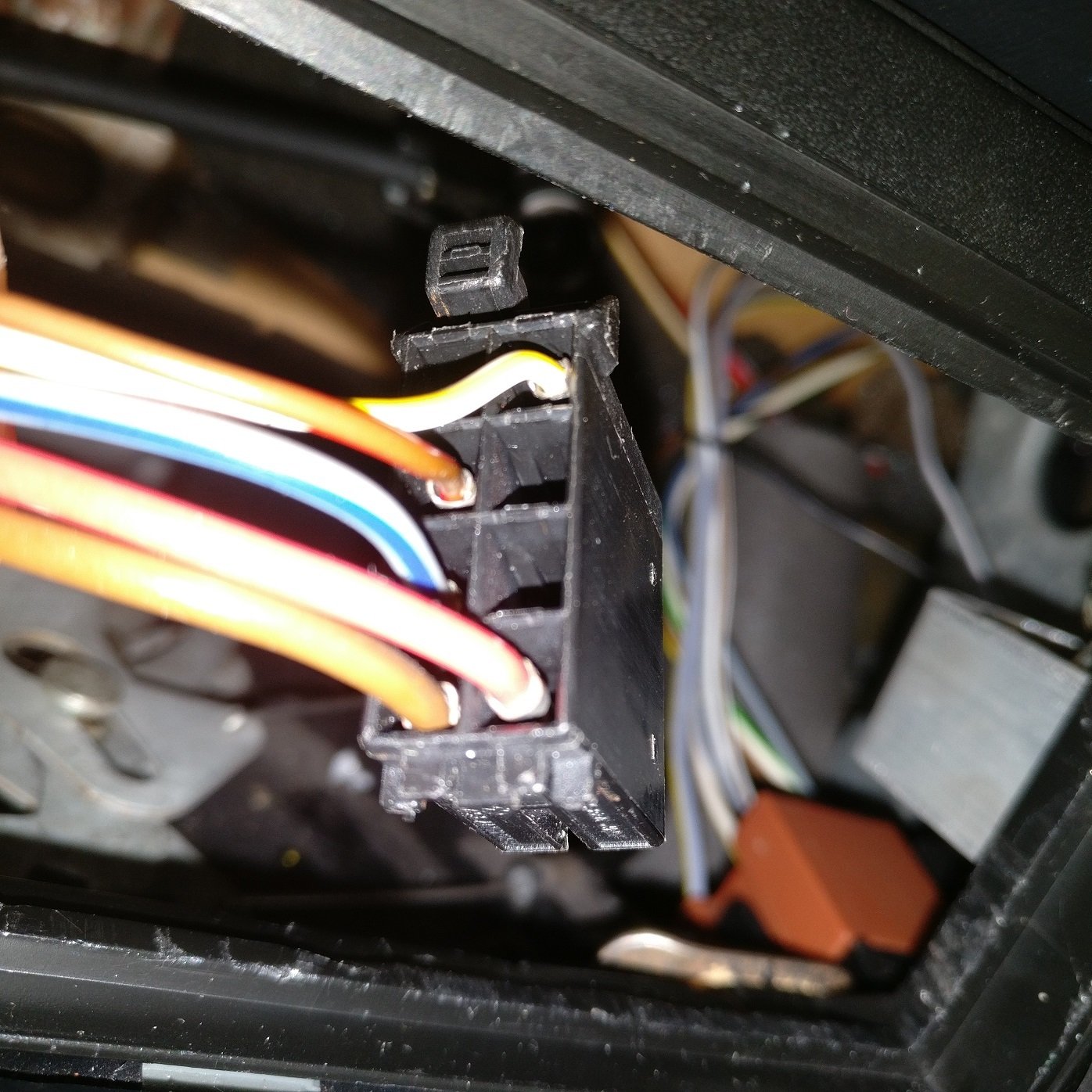 It sounds like your acc. switched live is the problem, but if it turns out that isn't the case it might possibly be to do with the security coding.

From (vague) recollection Gamma 3's came un-coded from the factory, it was up to the owner to decide whether or not they wanted to add the feature.

If they didn't and power was cut to the set the default code 1000 reactivated it.

If the did want the added security you had to first enter the cars chassis number, which is printed / etched on the set.

This was done just the once to activate the feature, you were then prompted to create a 4 digit number that you could use every time power was cut,

I think you could choose not to create the 4 digit code and re-enter the chassis number every time.

I also think that once you set up the need for a code other than the default 1000 it couldn't be reversed.
0 x
http://www.peugeot-205-gti.com

Thanks for that btw, some man for doing that.

Yeah its the same radio and mines is a 90’ so same wiring loom.

Had a play about with it tonight. So connected up
As per car loom...goes into safe every time yo switch it off. Be it turn it off or pull the key out.

Must be internal to the radio then?
0 x
Post Reply
16 posts

Return to “I.C.E and Electrical”

Users browsing this forum: No registered users and 2 guests