Come and show off your ride here!!
Post Reply
107 posts

Did the old thermostat housing remain in one piece? Always good practice to have one on standby as you did; i didnt when i changed one in 2010 lol

Sent from my SM-G950F using Tapatalk

From previous experience I treat the housing as a single use item, if nothing else they warp so re-use is not an option. Especially with PAS in the mix, not a job I want to do too many times. It’s a right pain getting that out the way, especially as the pas pump is low down and gets all the grime, water and all the bolts seize up. Happy to report appears to be leak free first time this time and no air lock.

Although I should have followed my previous experience and bought the new water pump to start with too.
0 x
K-Jet Resources - Officially branded k-jet Jedi by tabbie

Had a better look at your carpet pic; a very notable difference of pile there

Had to pop on here just to see your progress Eddy ,great effort mate love the new addition.
1 x

Thanks, been away for a few days - took in the Haynes and Beaulieu Motor Museums (been sticking loads of pics on my Insta @akaeddypeck) so no further updates but using the car for work and I can report it's toastie hot inside.

A little bit too much condensation building up though so I need to work back through my own guide to make sure I'm 100% dry inside as right now I fear I'm not. There will be more to follow.
0 x
K-Jet Resources - Officially branded k-jet Jedi by tabbie

First, the roof areal is rubbish but looking for a quick win I bought an FM amplifier of eBay for a fiver. 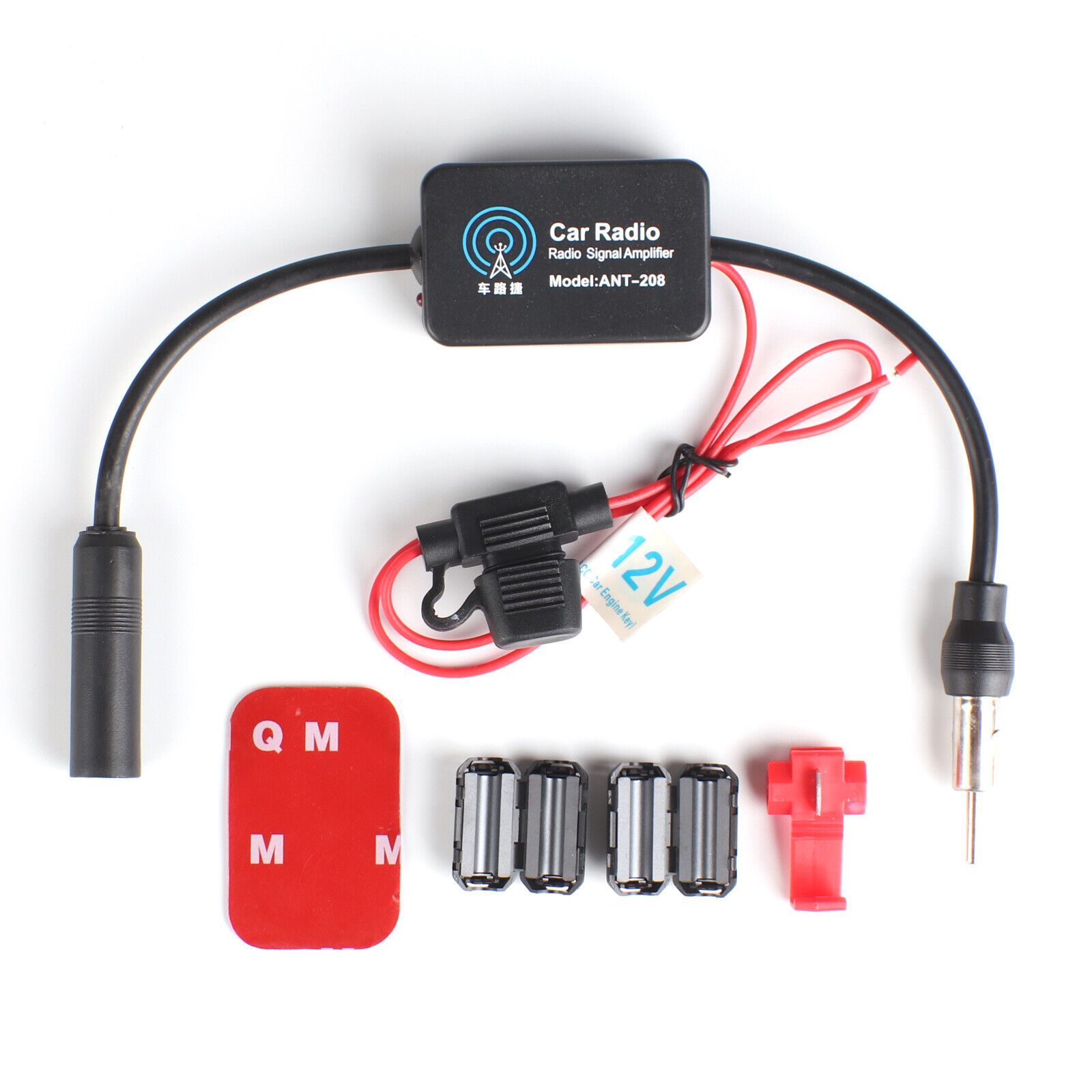 It made things better, I could pick up Radio 1 outside of work, but still had a couple of miles of radio black-out on the M5.

Needless to say i didn't use the red scotch block, I crimp fitted a bullet and plugged it into the radios blue accessory feed so it only comes on when the stereo is on.

I also bought a new (Genuine NOS Alpine) CD changer lead, since even though I kept the retro Alpine, I left the old lead in the old car as I'd trapped it under the carpet behind the heaterbox and was too lazy to free it.

So the CD changer is currently in temporary residence in the first aid box caddy to testing.

I say temporary, because although this ended up being the permanent location in the old car. The old car didn't have stupid low profile tyres on 17" rims with cheap coil-overs! so although I've actually be surprised how smooth the ride is, it actually must be a lot more "crashy" than I realise as it's certainly not smooth enough to play a CD for long without skipping. Luckily I do a lot of motorway miles where it's mostly OK as long as I don't hit a catseye too hard changing lanes.

So with the heater-box complete, and now I've finished playing with the front end of the audio I finally refitted the lower dash panels and tucked away all of the alarm wiring and crossovers etc that I discovered.

I also bought an adapter ring so I could fit my Italvalonti VW Motorsport wheel to the large spline momo 'type' boss. Since the original boss is small spine and I didn't want to mess around removing the large spline adapter - in case I wanted to revert back to the OE wheel. 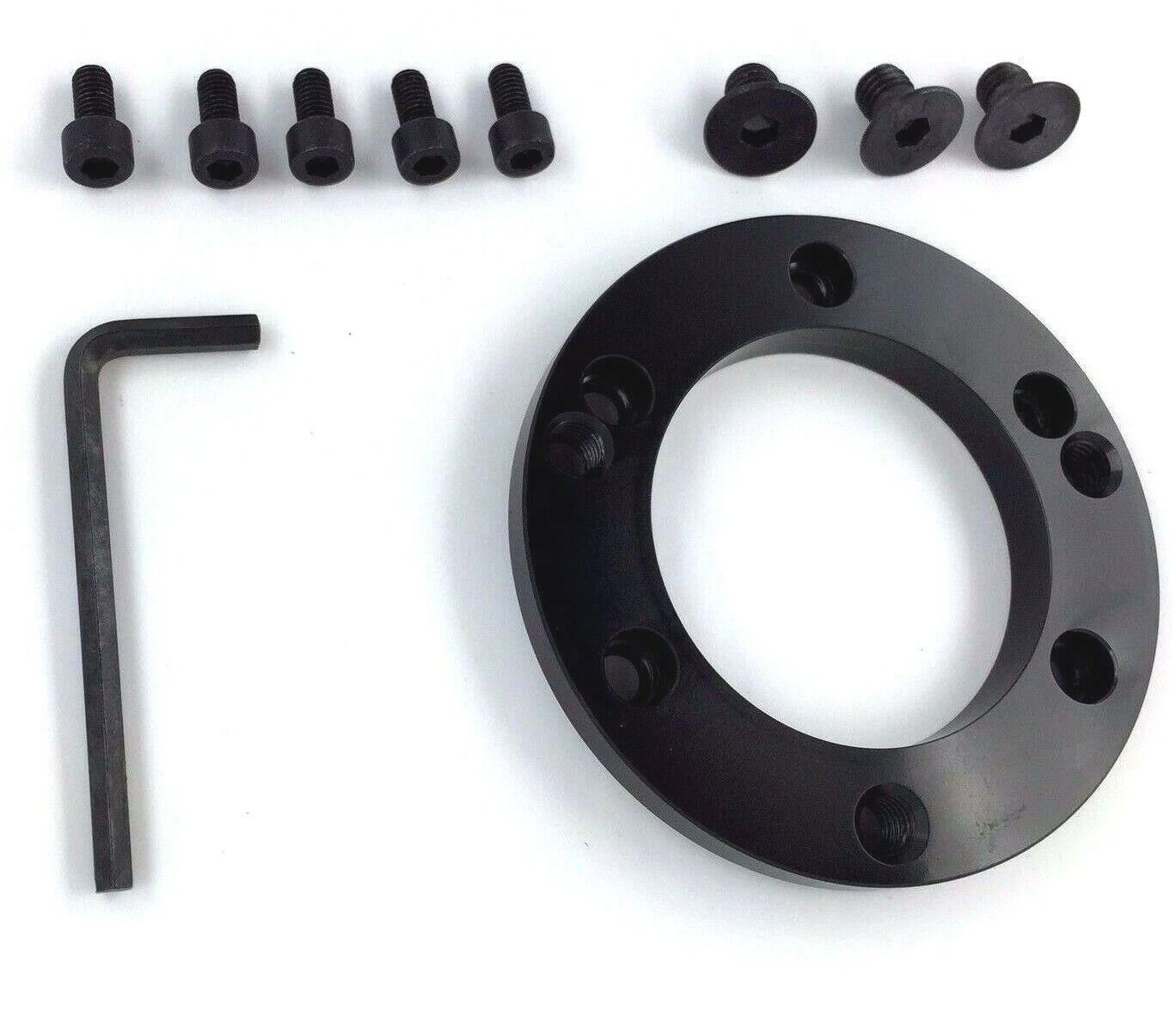 But it wasn't till yesterday afternoon when I was sitting in the passenger seat as I was letting my 16 year old daughter have a drive round a local disused car park that I caught a glimpse of something from an angle I wouldn't normally have.

The cheapo eBay boss that came with the car sits about 5mm away from the horn contact.

So now I'm on the look out for a genuine large spline momo boss for not too much money. I have a spare small spline one I might need to pop up for sale to fund said purchase.
0 x
K-Jet Resources - Officially branded k-jet Jedi by tabbie

I too have a spare small spline boss.

Had to buy a large version. They have gone up £3.50 from heritage since i bought one in June

Does your aftermarket hub come with it's own horn ring or does it utilise the one from the VW wheel?

If it has it's own and it's doable maybe swapping to the original one may help?

Do you find the 3x hole to 6x hole adapter affects the steering feel, saying as it also acts as a spacer bringing it closer to you?

Some Audi Quattro / Porsche hubs are available in short and long versions for road / racing applications though there's much more of a difference in length than the 1cm or so your adapter likely creates.

The 205 has no PAS, I was speculating if the wheel was closer to me might it give better leverage? Ive seen 2cm spacers avalable.
0 x
http://www.peugeot-205-gti.com

The aftermarket boss has its own horn ring but it’s very poor quality. It’s very short since it was fitted with a deep dish wheel. so with a flat wheel and even with the adapter ring it’s still short and too close to the stalks. the mfa switch on the stalk could do with a bit more clearance.

I had one of these adaptor rings before to convert a momo boss when I bought a nardi wheel, that did bring it forward. Most difficult thing is it put the stalks at a further reach.

Anyway, Turned out the spare boss I have is for a bmw e30. I guess I should get that on eBay.

A decent momo boss should sort me when I get round to getting one.

I did a few other jobs this weekend that were on the list.

Previous owner had a set of Recaro seats fitted. He refitted ‘badly’ the originals before the sale. Unfortunately they we’re bolted straight through the floor. Meaning 4 holes on each side. At some point in the future I’ll weld the floor properly but for now I’ve put in some stainless coach bolts with large washers and coated in waxoil. The bolts were from some I bought to fit the beetle bumpers.

Also hooked up the seat mech and got the seats sliding back and forward as I said, fitted badly, so they weren’t previously free running. Need to get new plastic sliders and gummy bears to sort it fully though.

Undid the rear wiper lay flat mod, and put that back in it’s appropriate place.

And replaced the coolant flange on the side of the head. It started leaking after I did the heater matrix and stuff, presumably I upset it swapping the pipe work. The one I took off had been gunged up sealant.

Had a look at the boot lock. As It doesn’t lock with the central locking. Wasn’t sure why, but with my son as a second pair of eyes at the back we were able to determine that the boot actuator isn’t functioning. So that’ll need further investigation.
1 x
K-Jet Resources - Officially branded k-jet Jedi by tabbie

Users browsing this forum: No registered users and 12 guests