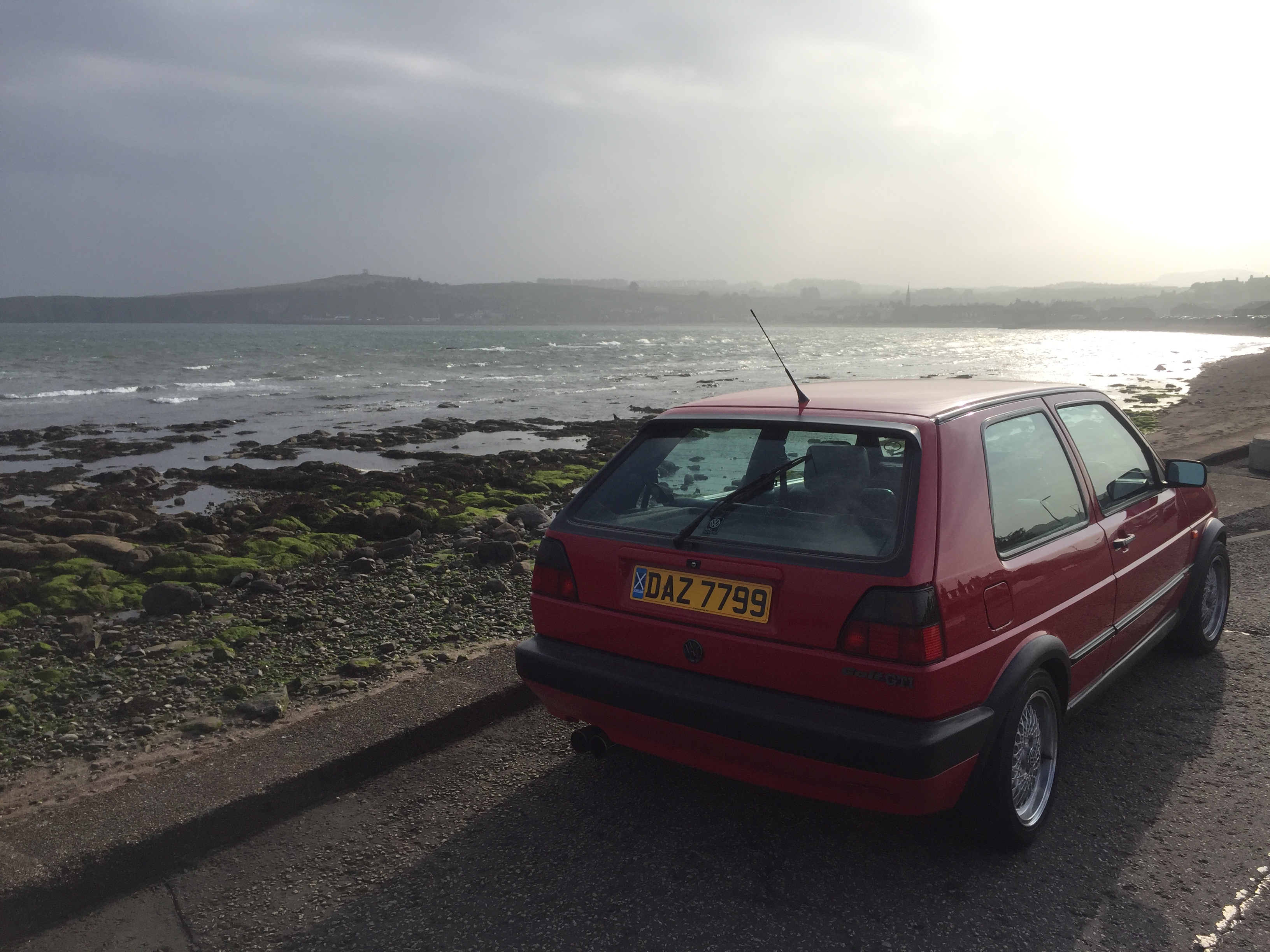 How I got the car:

Passed my test at 17 as soon as I could, I’ve always been interested in classic cars with my brother driving a mk1 fiesta and my dad still owning old mk2 escorts he had in his younger years. He said he would buy my brother and I our first cars, i had my eyes set on a mk2 golf but I always thought I’d have a little 1.3 or maybe a 1.6 driver but one day I came home to a lovely little 3 door GTi 8v sitting in the driveway, he took the train down to Glasgow and drove it all the way back a good 160ish miles and it never missed a beat! I was hugely grateful and of course I look after the car as much as possible, since I’ve owned it it has flew through every MOT with nothing but a wheel bearing advisory! the car was first registered in Preston Lancashire but seems to have made its way to the Glasgow region and now it resides in the north east of Scotland, and it’s here to stay for a while, I absolutely love this car!

Mods done to the car:

There are not a huge amount of modifications so I’ll just try list a spec:

Original PB 8v digifant engine with 172k on the clock, daily runner so the mileage is constantly rising about 12,000 a year! Original 5 speed gearbox, original grey genuine leather interior including door cards (which I’ve never seen on another golf, I don’t want to use the ‘r’ word!), Jetex s/s exhaust system, melber 15″ alloys on Toyo Proxes (these wheels originate off a BMW or Porsche , I’ve never seen another set I don’t think!) lowered 35/40mm on lowering springs, uprated headlight loom.

It has its little battle scars here and there but it’s proud of them. It’s a very honest little car and it competes well with today modern motors!

Keep using the car every day as I have been, keep on top of the little engine so it runs for ever! I hope to wire in an alarm/immobiliser system myself as I ripped out the previous outdated one. For now I’m prepping it for winter and putting on some g60 steel wheels, it’ll be used right through winter so I’ll be extra focused on ensuring she’s running good. There is a little bit of welding needing done, inner wings are starting to go, and common spot at the fuel filler cap is eating through too, other than that she’s solid! Never been welded other than the jacking points which is pretty common and perfectly acceptable for a 25 year old golf! She turns heads everywhere I go in the car and even as a daily it’s been entered to show and shine/concours events and received lots of attention! Plans are to try and keep things as OEM as possible, I am not overly interested in engine conversions or anything at the moment and insurance will agree with me there! I want to keep using the little 8v for as long as it can, maybe even give the original engine a rebuild? Who knows, I’m just enjoying the car everyday and appreciating the mk2 golf community, some of the guys (and girls) on here are so knowledgeable and don’t think twice about sharing that knowledge and helping others out, it’s great. I learn something new everyday with this car and it is all part of the fun of owning a classic VW when it comes to fixing it!