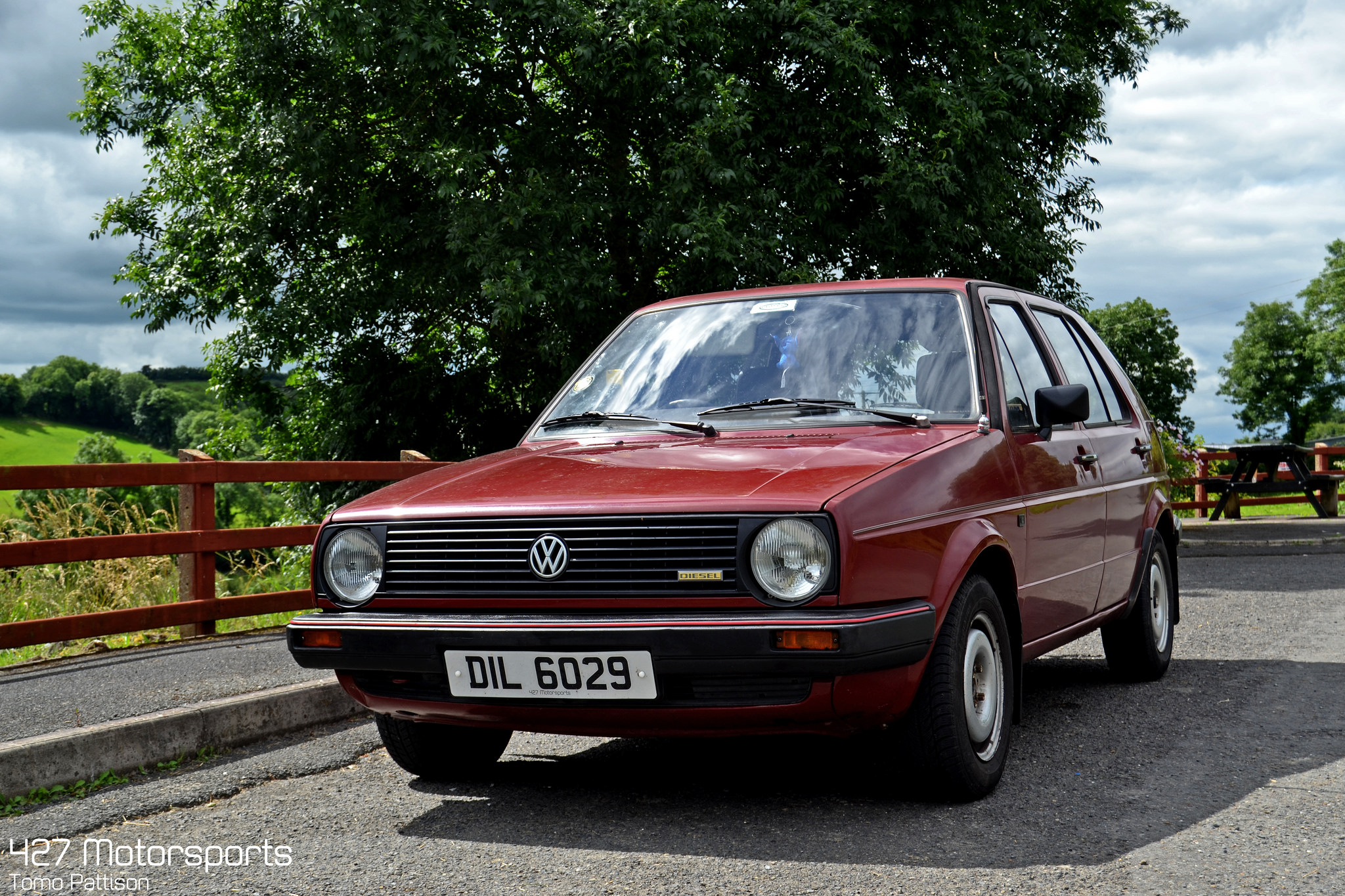 This is my 1984 Mk2 Golf ‘C’ 1.6 Diesel, or as it’s more affectionately known, ‘Veronica’ (I’ll get to that in a minute). It’s a base spec model, manual windows, no power steering, no central locking. It’s one of the earliest known Diesels left in existence, and certainly one of the oldest in Northern Ireland.

So how did I come to have it? Well, originally, I didn’t. My brother was looking for a classic car, and naturally, I suggested a Mk2 Golf. After a while of hunting round, he found one, in Enniskillen – 50 miles away from here. Having had experience of knowing what a bad Mk2 Golf is (See my build thread on ‘Lara’ for more information on that…) I was dragged along as I knew what to avoid and all of the bad points. Now, at the time, I had no clue the importance of the car – I knew it was an early car but I didn’t know just how early, or how rare the colour is, or just how bad a non-GTI is inside. However, after a quick look over and a test drive, she was our- his. She seemed to be in very fine condition and underneath the car was absolutely immaculate. Based on body work alone I said to go for it – we all know that you buy a Mk2 Golf mainly on bodywork, as anything else can easily be sorted or rectified.

So we got her home, and I asked him – What’s her name? All cars that are loved should have a name. He thought about it for a while, and it came to him – Veronica. Veronica the Volkswagen. (Personally, I’d have called it Debbie, but that was to be saved for another Mk2… Sore subject.) And the name has stuck since – you don’t change someone’s name.

So he drove it for a little while, and it basically dawned on him that classic cars pretty much just aren’t for him. Or that a 1.6 straight diesel is painstakingly slow. With this, the car was sold to my dad – when it then lay in our back yard ever since. You may have seen it in the background of photos of my GTI, and often I would get asked about it. I knew if I just left it there, it would be forgotten about and eventually would become mine…

Fast forward about half a year (and another Mk2 and Subaru Impreza) later, and it pretty much happened. But I wasn’t happy with her how she sat – the door was left open so the interior was a lake, the engine bay needed serious work as it was about three different colours and backed up with surface rust. But that was only the bloody beginning.

After having gotten extremely fed up of my GTI (Meaning, after around being towed home countless times and having to avoid towns and traffic lights because it’ll overheat), I decided enough was enough – I’m turning 19 now and that means classic insurance is more feasible, and I’ll have a backup car. Just have to get it MOTd – no big deal, right?

Did I forget to mention I had a deadline? Yeah. In August (this month, actually) me, my better half and my friends are going on a roadtrip around the circle of Ireland. I decided there was not a hope was the GTI going to make that trip so this car was going to be the one. This was decided at the start of July. So this meant doing all of the engine and bay work, wiring (I’m not even going into the wiring in this post) in under a month, so I could get the MOT booked and passed.

To cut a long story short, she defeated all odds and passed MOT first time on the 25th of July, perfectly within my deadline. You can read all about it in my build thread on the forum.

So what’re my plans now? Well, first off is a real good treatment session for the paintwork as it’s in a shambles. Then I will be treating it to new pinstripes, matching bumpers and just having her the way she should be. It’s too rare to start messing with too much, but needless to say I am very happy with the way she has turned out. I couldn’t have done it without the help of my dad and a few select members of the Owner’s Club (big thanks to Tim for wiring help and to Chris for what was essentially automotive emotional support), and this car is a testament to a lot of hard work, and what you can achieve when you really put your mind to it – and give yourself a deadline.