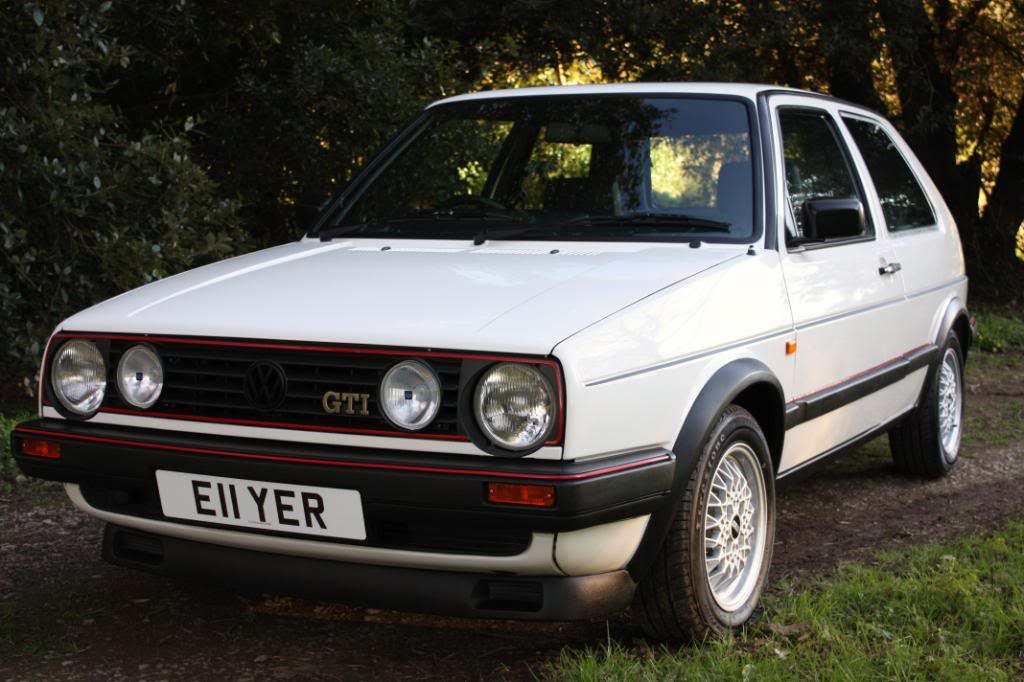 Hello, I am Mark and for complicated reasons you may know me as Damien.wrl, I live in Cornwall and am probably the oldest person on the site…One of the few benefits of extreme age is that when I was young free and single my choice of nearly new cars was either a GTi or an xr3 (no i) I choose the i and the rest is history,I owend two 1600 MK1s and since have had MK2s Corrados and many other nice, generally German
cars.

Back in 2008 I retired early and instead of a gold watch I decided to buy my dream car, the choice was to be between an e-type and a 911, in hindsight I mistakenly went newer and chose a 997, this car is gorgeous but being in black it was a struggle to keep it as clean as I liked. I decided to buy a daily… Many days went by looking for a tidy rot free MK1, even back then they were rare and expensive. As you do I found myself looking at some of
the other cars out there and found myself watching a 32k mile white MK2. The “buy it now” was far more than I wanted to spend but when it didn’t sell I contacted the owner and offered him a lot less, he said that it had £1500 of wheels and suspension on it but I could have it with the original steels and suspension for close to my price.( think youngsters would say here… Get in????) A deal was struck and off to the Midlands I trekked.

The car was sold originally in Southend, believed to a man with a large fleet of cars, he kept it for ten years racking up 10k miles, a little old lady used and abused it for another 8 years adding 20k, she sold it to the man I bought it off. Currently very close to 35k miles.

It didn’t take me long to realise the car was in superb condition underneath the years of use. Over 18 months I cleaned under seal off arches, removed waxoyl from the engine bay and cleaned up bit after bit. One day I accidentally removed the grime from the jacking rail under the sill decal to reveal white paint, ended up cleaning them up.. when I did this I accidentally cleaned a bit of the underside which came up white so out came the axle stands and many hours of knuckle scrapping later the underside looks presentable.

It also became apparent that his car was to good to be a daily, so out of the garage came the Porker and the Golf went in, I have never gotten the wheels right having tried 14″ bbs, Bottletops,steels and the current NOS teardrops, the original wheels were steels.

Due to my desire to keep it as it left the showroom there have been no real mods but I do have a large collection of Blaupunkt stereos which I rotate. (car came with a Panasonic fitted which I have kept and bought a spare)

The paint work is by and large original with new paint on the passenger door prior to my ownership and after some lovely lady hit and
runned me new paint to a chip on the drivers rear quarter panel. He is as clean as i can get him but he sadly cant compete with brand new restorations, the word is Patina

Every year for the past 6 years in the spring he gets a good clean and every year I find something else to smarten up, this year however I have struggled to find much so he probably is as good as he will get in my
ownership, time for me to sit back and enjoy it.

Thanks for taking the time to read my sad story of OCD, hope we meet you out there someday…

some pics of Vincent Van Golf over the
years