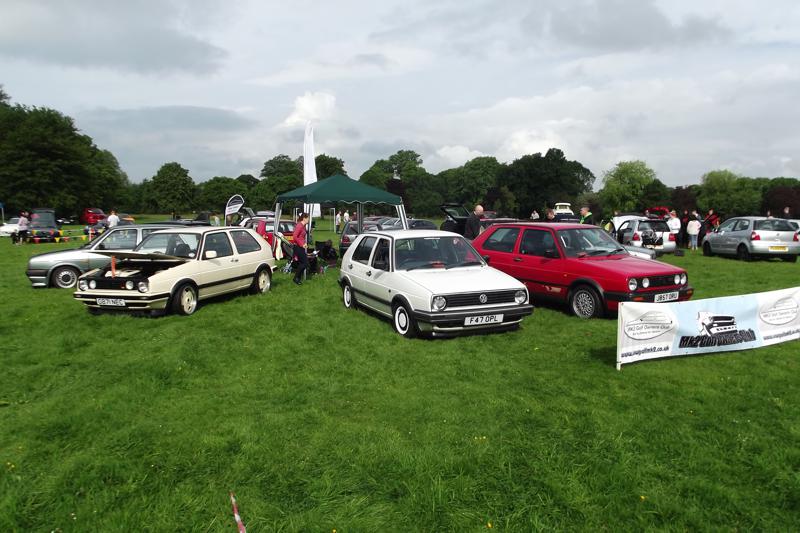 Unphased is a forum community with  love for all things VAG and German in the car world, Est 2008 and now has a large fan/user base. They decided that this year they would host their first show at Worden Park Leyland and sponsored by car cleaning gurus Autofinesse.

As we have quite a large amount of members in the NorthWest it was only fitting that we as a club made an apperence so Baz started the wheels in motion. We soon had a full stand of 10 cars with a couple in reseve.

We met up at Charnock Richard Services, following the rainiest day we could have imagined, with a fantastic selection of mk2’s from G60 to CL all different and individual, we were even graced with our founder Chris, having left his house at 4.00am to get there!!!

A quick chat and we left in convoy for the 5 mile run to the show. First impressions were good, well organised with plenty of Stewards and helpers to show us to our plot, which was really well sized. A quick clean-up of the cars and I set about my OCD ways (so I’m told!!). The cars and stand looked great and I was amongst some great people, some of whom had met for the first time but talking to eachother as if we had known one-another for years.

There was a great selection of VAG and German cars to be seen as well as some non VAG, a ’50’s GM Stepside and V8 Mk2 Corina to name a couple. the weather held out for the large majority of the day but when it rained we just hid under our  small gazebo (lovely and cosy!!)

We needed Coffee!! Well that was easier said than done, VWshortie and VampyrGTi set of the the nearest TESCO to get some. It was “sort of” warm when they returned some 30 minutes or so later, which leads me to the only real critisism of the show, the toilets where a long way away from the showground which was too far esspecially for any disabled people at the show, and secondly there was no food on site until well after the show opened, which again was by the toilets and not the greatest to be honest.

The company I was in and the cars that surounded us made that only a small issue though and as a first attempt I though the show was a great attempt with great variety and a pie eating contest thrown in!!! (Lancashire members will proberbly think thats more important than some others!!!)

All in all I will be there next year with another club stand and I can see this show going from stregnth to stregnth as the years go by, we had a great show we had great cars and GREAT PEOPLE! Look out for this one next year and who knows maybe a 20 car stand next year eh??

I’ll let the pictures do any further “blabbering on!”