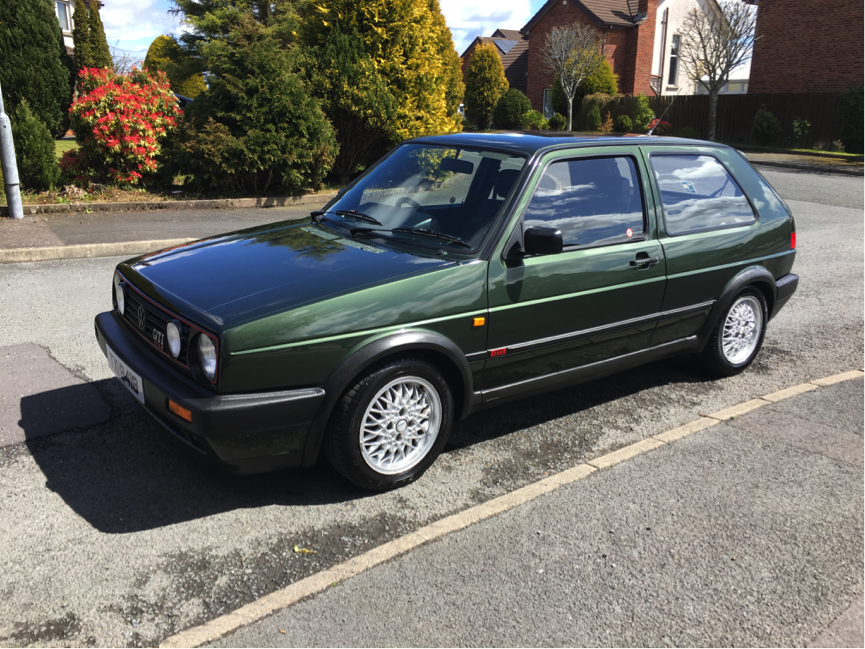 I’ve owned a few GTi Golfs previously and for the past 20 years I’ve longed for a 3 door Oak Green metallic, big bumper 16V model. But it had to be 100% standard spec. In April a mate told me of a small country garage selling a MK2 in exactly the spec I am after.

The car is now 25 years old and still with the original owner. The gentleman is now 94 years of age and finds it difficult to get in and out of the car (He prefers his 2 Mercedes), so he asked the local garage owner to sell it on his behalf for a reasonable price.

The car is 100% original apart from the red stripe along it. Still has 4 months MOT and is taxed. The car drives like new but interior has got a little mouldy due to sitting in a stone garage for most of the year but a deal struck, with me paying about 10% more than I swore I would.  First thing I did was pick off the red stripe along the side of her.

The Golf is then given a good clean and gets it’s maiden voyage on Mayday with the sun shining and the colour is amazing after a Buff, wax and Autoglym lifeshine!

This car has 180,000 miles showing, but has a full service history to match it. It is still as it left the showroom in that it has the original dealer window sticker and tax disc holder. The windscreen is original and still has the VW assist sticker with the breakdown telephone number on it. I guess it’s what you might call a barn find.  I’ll have obtained replacement original suspension for the rear of the car as it appears to have sagged. The only other thing it will be getting is a re-furb of the original alloys.