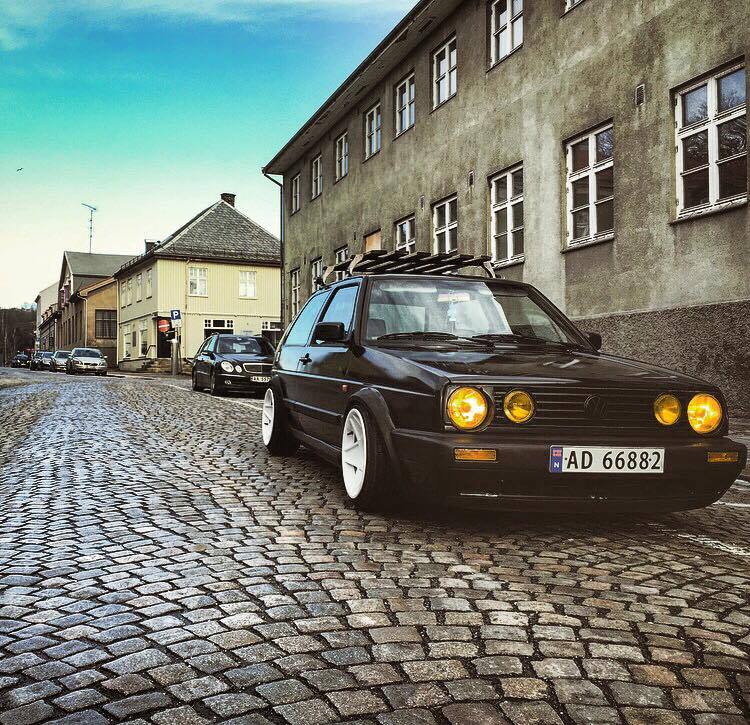 My name is Chris, I am 25 years old currently living in the Norwegian capital city and studying full time to become a professional car painter. Hobbies includes art and my lady. I’ve owned this car for a little over a year.

I used to have a MK3 Jetta that needed new wheels, as I walked into the wheel shop I noticed this super clean MK2 sitting in the workshop collecting dust. The owner of the car was also the owner of the wheelshop, i ended up talking to him about the car and it turned out the car had been sitting there for like 1 year just collecting dust. It had failed MOT, and just did not get used. He told me he was going to scrap the car, but i made him sell it to me instead. Its a kinda cool story about how i obtained at least, i just wanted to buy some new wheels for my MK3 Jetta. Did I consider any other cars before buying? No! I did not consider any cars at all! Ended up with the golf out of … Luck?

What do I want to achieve? I have a vision about what i want to make of this car. It will have a full re-spray in Ferrari black “nero” by the summer, and i would also like to build in a 16V engine in it. In terms of style, my plan is to go all blacked out on the exterior, engine bay and interior. Like a batmobile. Completely original 1.8 8V. Not much to it. Yet.

Who helped me with it? My dad has given a lot of his time helping out with this car, just getting it to pass the MOT was a pain in the back, also the car had a lot of unoriginal parts on it which i wanted to swap out for OEM parts, my friends online and in life have helped me out a lot with finding and fitting new parts. Its rust-free. Its a rust-free MK2. That makes it special. I am also trying to go for a different look than whats typical on MK2s.

My early mint condition GTI interior would be my favourite part of this car. I love it. My inspiration i would say is inspired by moody days and darkness. It might sound funny, but its the truth. Its dark, and classy. Things i don’t like are Im not a huge fan of the 1.8 8V engine in it. Im not a huge fan of the front height, it needs to be dropped 1cm more in the front. My biggest obstacle was my engine breakdown. I ended up spending months and a lot of money trying to figure out what was wrong. I ended up swapping for a new engine, wich also gave me trouble. It finally runs like it should now.

On a satisfaction scale of 1 to 10 of how happy I am I might say about a 6, it will be a 10 when I am done. Its still an on going project, hopefully it will be closer to complete by the time this article hits! I would swap for a 16V supercharged GTI engine, have my engine bay shaved and painted, i would split my 3SDMs. I would also love to dig into the interior fitting rare parts from Wolfsburg and Porsche.

My biggest critic? Me. I am defo the biggest critic. And also one of my fellow MK2 friends in Norway. But i critize his ride as well so its cool. What one word best describes my car? I’d name it Golf. But one word? DarkSluttyMessyScrapinBastard.