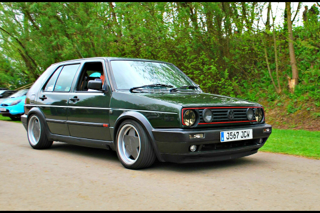 Mk2 Golfs have always been a favourite car of mine and I’ve been lucky enough to own 3 (so far!) It’s definetly 3rd time lucky with my current 1991 J reg oak green 16v.

In 2001 I owned a 1985 C reg altas grey 8v type 19 until it was written off when someone crashed into the back of it.  With the insurance pay out I quickly purchased a 1990 H reg black 16v which I owned for a few years until I bought my first house.

I then spent numerous years driving various piles of crap just to get me to and from work.

Then 18 months ago, my wife suggested that I buy a new car and originally I planned on owning a ford cortina (thinking I was having a mid life crisis!!!) but Mk 2 golfs have always been the one for me and I set about searching for the ideal MK 2 golf.

As you all know, you have to travel to find these hidden gems and after viewing a couple of not so hidden gems, I found my (now) car advertised on ebay.  Lots of phone calls & emails to the current owner and I soon found myself on a train with a one way ticket heading to Redruth in Cornwall to (hopefully!!!!) collect my new car.  The car was as advertised so I made my purchase and the drive back along the A30/M5 was amazing.

The car originally had 17″ wheels which with standard suspension looked like a golf country!  Once lowered on coilovers, I realised the 17″ wheels had to go.  Fortunately at a dub love meet one evening, I met Chris Teague in his BBM with a set of Borbet A’s on it.  I bought the wheels off Chris and set about a refurb to how they look today.

I’ve swapped the standard exhaust system for a stainless steel system resulting in a much better sound.  I’m now on my 3rd gearbox, currently running a o2a gearbox from a mk3 diesel but the car is still very much a work in progress and its my daily driver on my commute to work and I love it.

Lots of shows planned this year, I’ve already attended the Spring Performance action day at Castle Combe and was part of the club stand.  Very much looking forward to GTI international in July and planning on making the national meet this year too.

And hopefully many more.