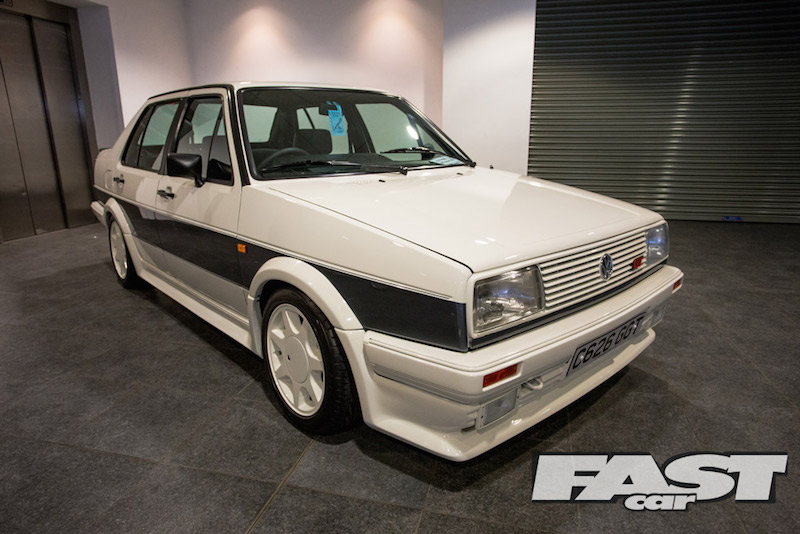 As you can see there’s a running theme with my cars and that is GTI Engineering. That all started with the Golf Syncro and that led onto the Jetta GT Special. Basically I’d picked up a sales sheet for the car to add to my collection, and kinda fell for it in a warped 1980’s kinda way. That’s exact sales sheet is now displayed in a colour coded stand that I use for shows. A nasty bike accident followed by my terminally ill mum led me to a secure financial position and the decision was made to realise that desire. The car was found on eBay and when the car didn’t sell, I contacted the seller and arranged a visit. Annoyingly, the seller had used past pictures of past glory on the eBay advert. Needless to say it was complete, so a deposit was paid and the car was collected a few months later when my mums Estate was sorted.

The car was really only fit for the scrapyard, so several years of eBaying, lucky finds, International purchases and many miles of driving around the country collecting parts ensued. Mates rates were employed, favours pulled in, and the painter Sie, pretty much became a foster parent. The car was restored back to standard using period publications as reference. The suspension was all shot, so a Koni/Eiback -40mm kit was used (the car was lowered 40mm at the time). I don’t know how many times I’ve been asked if I’ve trailered it to a show, but the only times its been trailered in when it was taken to and collected from the painters. The shiney-ness is down to hard graft and I’ve spent more hours cleaning that car than driving it! I hate cleaning!

There’s always jobs to do on an old car, and I have plenty to do! The next main project for the car is to transform the stereo system with a period correct Blaupunklt CD player, amp and modifying the rear speakers. Its been a great and very steep learning curve, and detailing the engine and bay is another future plan (Stanford Hall concours super class is the aim).

Its hard to sum up 5 years in a few words or pictures, and there’s too many ups and downs to this project. Please feel free to read my build thread, but to sum it up- the bloody thing fought me all the way!