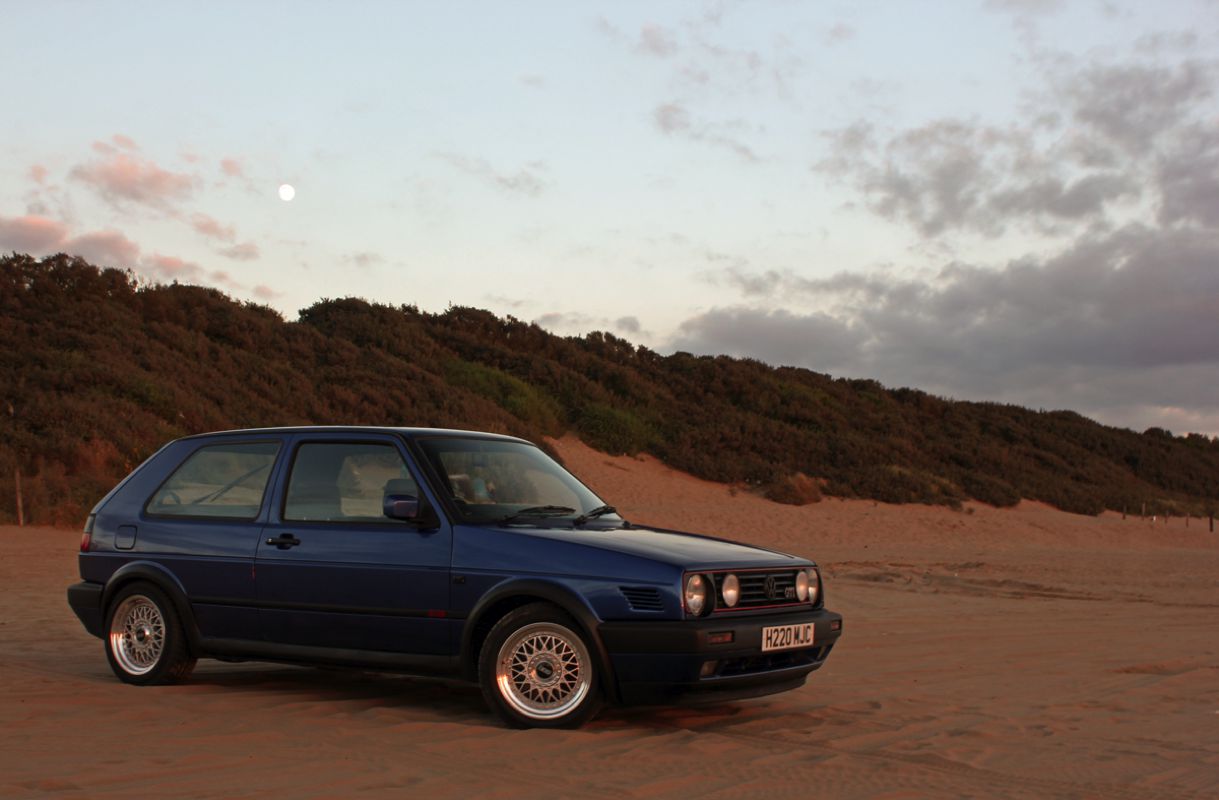 My latest mk2 story started just over 6 years ago, I owned a Bright Blue Metallic GTI with an 2.0 16v ABF engine. I’d given it a fair overhaul and ran it for a year, including a trip to the Nurburgring and several trips round Castle Combe. Unfortunately, a job change which required a drive over some of the worst moor roads you’d ever seen ment I reluctantly had to sell up before I ruined it.

Four years, four more mk2s and a lot of pining for another Bright Blue golf, I was finally in the position to get another. Unfortunately, by now, they (and mk2s in general) had started to climb in value. It was getting very difficult to find one that wasn’t scene taxed to death, rotten out or in some cases, both. After about 7 months of searching, I finally managed to persuade Baz (BLCSO) to sell me his on the promise he gets first refusal when I come to sell her on (though don’t hold your breath on that one, Baz!). I’d spent months harassing him over the forum and in person, at a VW Action Day I walked up to his car, knocked on the boot and said “that sound means the engines going to fall out, you should sell it while you can”, little did I know, that would come back to haunt me… twice!
I’d decided that I wouldn’t go all out on the car, just give it a good clean, upgrade the chassis/suspension and tidy up the odd imperfections. At this point I should point out that my last mk2 kept its original engine for a grand total of 24 hours before I removed it in preparation for the 2.9 VR6 I later fitted. I’d done a few different conversions in the past and fancied doing a 20v conversion. But I was going to save that until the winter of 2013 and just enjoy driving a tidy 8v GTI until then. The car, however, had other ideas…

…just over 2 weeks later, she let me down, couldn’t get her to start at all. A little fault finding lead to discovering the main earth loose on the gearbox which had taken out the ECU. Fortunately, I had one in stock and wasted no time in swapping it out. To my delight, it fired straight up off the key and started to idle! However, the delight was short lived as within 30 seconds a rattle started, 10 seconds later, the rattle turned worse and about a minute after firing, the engine completely died. Turns out the ECU had left the fired petrol down the bores, which had diluted the oil and taken out the bottom end.
This pushed my plans forward somewhat. So over the next 3 months, while I saved up, I stripped her down, replaced any rust I found and generally prepared the chassis to receive the new engine. Due to a misspent youth, I had a fair bit of debt at one point and that winter, a lucky PPI claim cleared that debt and allowed me a budget to buy a donor car and a set of RMs.

So the project was on, my direction was to keep the car OEM+. VW invested millions in the development of the engine and management, who was I to argue? I wanted to use as many OEM parts as possible to generate a factory fit and for everything to work as VW intended.
I bought a fully taxed and tested, low mileage Seat Leon Cupra, sporting an AUQ 20v engine. I’d owned this engine in a Bora for 5 years, after 2 Nurburgring trips and several Combe sessions, it was the one for me.

After a little research on various forums, (with Rubjonnys name coming up more than once!) I managed to work out how to mate the two looms together to get the engine running, albeit with a stage 2 REVO map and a few other engine tweaks.

Over the next 3 months, I went about replacing every nut, bolt, bush and bearing I could get my hands on. I think the total of the bolts alone came to about £120! To date, I think the only mechanical part I haven’t replaced is the sunroof mechanism (though I did refurb the arms and deflector!). It turned over on the 2nd attempt and a couple of weeks later, the finished car went straight through the MOT. I’d created exactly what I was after, a mk2 golf that looked standard. Even when you got it, it just looked like an 8v GTi, right up until you stamped on the loud pedal.

All went well, I took her to various shows, up the drag strip at inters ran her daily for a while, all through the winter and the only thing that let me down was the heater matrix. Then, almost exactly 2 years to the day after buying her, I took her back to Combe…

The first session went very well, not missing a beat, overtaking things with much more power and the oil stayed at 112. Then we went out for the second session, the first 8 or so laps went very well again, then on the start finish straight, at about 120mph, she went bang, big style! It turns out the con rod bolts are a weakness and if you’re unlucky, the can fail. It’s exactly what happened to me, locking the front wheels up and sending me backwards at around 100mph towards Quarry corner. I somehow managed the save of my life, brought the car facing the right way and pulled off on the grass. You’re told if you have an incident, to leave the car and get behind the barrier, which is exactly what we did. The marshals we with us in seconds, but upon our return, the white smoke from the exhaust had turned to black smoke coming from the interior, she was on fire! The oil that came out the fresh hole in the engine sprayed round the back of the block, caught fire on the manifold and lit up the UJ Boot for the steering rack. 8 fire extinguishers and the longest 3 minutes of my life, we managed to put her out. Fortunately, no paintwork was damaged, but the dash and everything behind it got fried.

So that pretty much brings us up to today, I’m now left with a car that needs pretty much everything in front of the front seats replacing. But there’s no way I’m going to give up, I’ll replace everything that needs it and maybe throw in a few upgrades for good measure…

If you want to read further, you can read my build thread too.