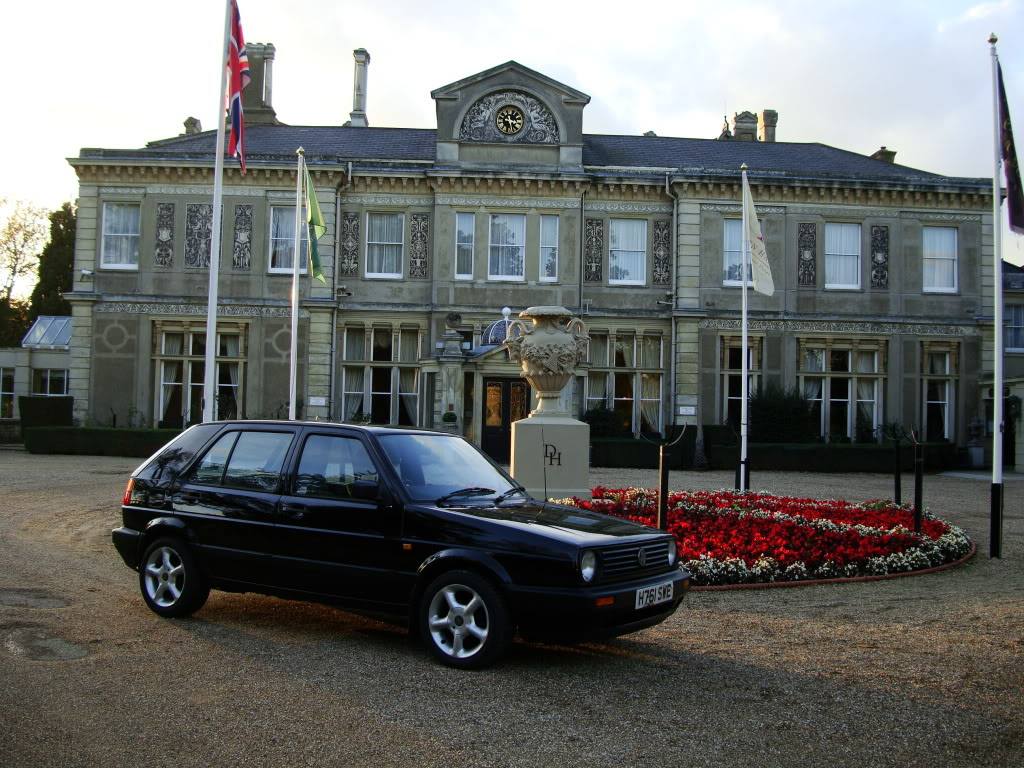 In October 2009 we bought our black 1990 Mk2 Golf GL in basically original condition as the 3rd owners from new. Initially the car had some running issues due to the old Pierburg 2E2 carb being in a sorry state. But I thought I’d bought a pup when I pulled up to buy fish and chips on my way home from having bought the car and it refused to start again, much to the amusement of some young lads walking past. Fortunately a new starter motor solved this fault.

The first jobs were to fit a few parts from our old GL, which included the stainless Mongoose exhaust, alloys and engine components. The carb, however, required a recondition, so off it went to Bromyard VW, who did the required work and fitted brass plated parts for extra bling factor. The car continued in this state, relatively unchanged for the next few years, until the interior was swapped for a leather GTI interior and old sagging headliner re-trimmed in black vinyl to match. Shortly after this interior replacement the head gasket required replacing, and as the engine had done 160k by this point I opted to have the head reconditioned at the same time. For 18 months the car ran faultlessly and in this time I refurbished a set of Sebring alloys I had purchased years earlier and had them painted in Mercedes Titanium Grey. Darker than originally expected, but the depth in the paint comes through purple in the light, so really sets off the black bodywork on the car.

In October 2016 we had some new suspension fitted in the form of Spax PSX 40mm, to give it a nice direct feel and to improve the looks further. In November 2016 quite significant blue smoke began appearing from the exhaust and power started dropping off quite significantly. After speaking to my mechanic, who had assured me it was very unlikely to be the head, after having been reconditioned only 18 months prior, so likely to be a failure within the block. This was a crunch point, and resulted in us even taking an Audi SQ5 on a test drive as potential replacement, but was soulless in comparison and our hearts told us to persevere with Gumpert. As I was assured the body was in good nick, Mrs Mac and I decided to opt for an engine conversion, but go a little nuts at the same time. I got in touch with the team at Waterwerks about my idea, who agreed eagerly to take on the project. So I bought a 2005 Audi TT 3.2 V6 DSG that had been written off.

The car returned, looking identical to when it went into the workshop, but having had the engine from the TT fitted, mated to a Golf V5 close ratio 5 Speed box, Quaife LSD and Corrado subframe and crossmember. Not only that, but during the conversion I was in touch with Trackslag, who used the car to develop their R32 conversion downpipe, which was then fitted to the car, along with a 2.5″ system.

Immediately prior to the car’s return I was informed the car was “violent” and had insane throttle response. I think that’s the only way that it can be described! A hugely powerful engine in the very subtle looking body, but also very capable too, having come in 1st place for the Super Modified category on the track at the Owner’s Club National Meet 2017. The sound is phenomenal and hugely addictive, with instantaneous throttle response and torque wherever you want, but also very pliant in day to day driving.

Our intentions going forward are to fit some uprated BC Coilovers (currently on order) to improve handling further, get a rolling road remap for optimum performance and just to maintain it thereafter. This car is part of the family, loved hugely by both of it’s owners and will be with us forever, so keep an eye (or ear) out at National Meets in the future.